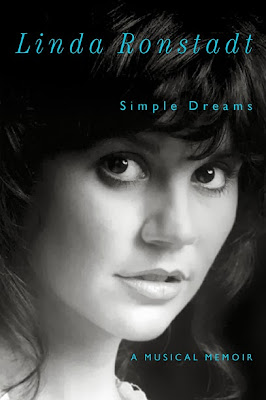 Growing up in the 1970s, Linda Ronstadt was THE female voice on the airwaves.  (And what a voice!) I had quite a few of her albums. When I was in university, I got my own stereo for my dorm room, and I would often put on an side of "Mad Love" or "Get Closer," turn out the lights, slip under the covers, and drift off to sleep to the soothing sounds of Linda singing "Talk to Me of Mendicino" or the spine-tingling harmonies of her voice entwined with Dolly Parton's & Emmylou Harris's singing "My Blue Tears."

Country, rock & roll, opera & operetta/Broadway, pop standards, Mexican folk music (in Spanish) -- Ronstadt could do it all (and did, much to the record company's dismay)(until they saw the sales figures). She introduced me (and, I'm sure, many others) to an amazing spectrum of great music.  In many cases, I heard her renditions of songs by Hank Williams, Buddy Holly, Bob Dylan, Smokey Robinson, the Rolling Stones, Warren Zevon & Elvis Costello before I ever heard the originals. Through her, I went on to discover these and other songs & musicians that broadened my musical horizons. I had long scoffed at my mother's Frank Sinatra records -- but when Ronstadt put on a 50s-style prom dress and started singing some of the same sort of songs with Sinatra's arranger, Nelson Riddle, I listened -- and then started listening to Ella Fitzgerald, Rosemary Clooney and, yes, Frankie. ; )

So I was thrilled to hear that Ronstadt had joined the growing ranks of rock stars to pen a memoir,  Simple Dreams -- apparently without the help of a ghostwriter. It is not a long book (about 200 well-spaced pages) but it is well written. I am glad I didn't wait for the paperback. :)

The subtitle of the book is "A Musical Memoir" and the focus is definitely on the musical side of Ronstadt's life (which is, of course, quite substantial and interesting). If you are looking for lurid details of her personal life, this is probably not the book for you -- although she does include a few good stories, including one about trying to ditch a very drunk and belligerent Jim Morrison. (Another good, albeit non-romantic story concerns a girl she & Nicolette Larson befriended while roller skating -- who turns out to be a member of the Manson Family!!) She actually uses the phrase "keeping company" to describe her relationship with Jerry Brown (then & now the Governor of California). (!!)

(I had an album by Nicolette Larson in my college days too. I loved her song "Rhumba Girl" & used to put it on and dance to it while I was getting ready for parties in my dorm room.)(That, and the album "Rio" by Duran Duran, lol.)  : )

Despite her many well-publicized romances, Ronstadt has never married. In her 40s, she adopted two children, a boy & a girl. There is a picture of her with her daughter as toddler, and she mentions them in passing, primarily in terms of their musical inclinations. You won't find any insights into adoption or single motherhood here.

It's hard to believe the Queen of 70s Rock is not in the Rock & Roll Hall of Fame (!) -- even though she's been eligible for more than 20 (!) years. Ronstadt claims she doesn't care. In the book, she brushes aside the "Queen of Rock" title: "[it] made me uneasy, as my musical devotions often lay elsewhere." Her personal pick for "the first fully realized female rocker" is Chrissie Hynde of The Pretenders.)

The book ends before Ronstadt's recent discovery -- & public revelation -- that she has Parkinson's disease -- and can no longer sing. I find it incredibly sad, knowing that amazing voice has been silenced.  But what a legacy she has left us!

A couple of my favourite Ronstadt songs (so hard to pick just one...!):