"I woke up so sad this morning" 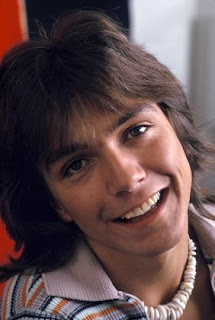 "I woke up so sad this morning." This headline on a Globe & Mail article summed it up nicely for me (and also cleverly twisted and incorporated a hit Partridge Family song to boot).

I started crying last night when I heard that David Cassidy was dead at the far-too-young age of 67.

As my dear penpal of 40 years commented on my Facebook post, "That sound you hear all over the world is the little teenage corners of the hearts of millions of women in their 50's cracking a bit at todays news."

She & I first "met" in 1977 through our mutual love of the Bay City Rollers (!).  But before the BCR, before Donny Osmond -- and LONG before New Kids on the Block, or NSync, or Backstreet Boys, or One Direction, or Justin Bieber -- there was David Cassidy.

I was 9 in the fall of 1970 when "The Partridge Family" came on TV.  My sister & I were enthralled, with the show, the music, but most of all, with David Cassidy. That hair!  That smile!! Those dimples!! That whispery, seductive voice!  We couldn't wait for each weekly episode.

Around that same time, my parents bought us a cassette tape recorder, a fairly new gadget back then.  There were no such things as VCRs or PVRs back then, but we would prop the microphone up close to the TV speaker on a stool and tape episodes of the show, then listen to them later again and again, memorizing the dialogue & the songs.  (I think I can still recite passages from "Danny & the Mob" and "A Knight in Shining Armour," which guest starred Bobby Sherman, one of the other big teen idols of the day.) 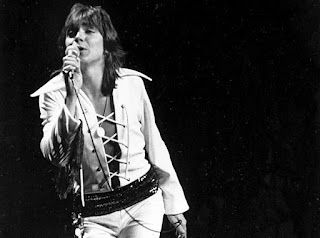 My aunt & uncle gave us the first Partridge Family album that year for Christmas, and my sister & I pooled our allowance to buy the next couple of albums too, as well as umpteen issues of Tiger Beat, Fave & 16 Magazine. We shared a room back then, so we didn't have to argue over who got the posters. ;)  My mother wouldn't let us tape the onto our bedroom walls ("it will ruin the paint!!"), but the door was stained wood and less susceptible to tape marks -- and so we had a big poster taped up there. I kissed it every night before I went to bed -- at least until poor David's paper lips started to wear away from the moisture. ;)  I was convinced I was going to marry him. Never mind that he was 11 years older than me, or that he was in California & I was half a continent away in Manitoba.

"The Partridge Family" ended after four seasons, and David moved on to other things. So did I. But I still smiled whenever I heard about him or saw him on TV, or caught an old Partridge Family episode in reruns.  Even just a few weeks ago, I found myself humming some old Partridge Family songs in the shower. I'm sure it's been well over 40 years since I listened to one of their albums, but somehow, I still know all the words. 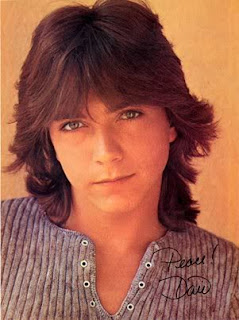 I suppose his death shouldn't have been such a shock. He'd announced that he was suffering from dementia earlier this year :(  and a few days ago, we heard that he was in critical condition in the hospital.  But coming on the heels of the deaths of so many of the other musical and cultural icons I grew up with (Glenn Frey of the Eagles, David Bowie, Prince, Kenny Shields of Streetheart, Tom Petty... and, earlier this week, Malcolm Young of AC/DC...), it was just one more blow, one more piece of my past gone. And his death was especially personal in a way those others weren't.  It was a shock to realize he was 67 -- how did the eternally youthful David Cassidy get to be 67??!!  (More to the point, how did I get to be 56??!)  Even so, 67 isn't really that old...

"The stuff we grow up on is formative. So when a star we grow up watching or listening to dies, a part of our foundation, even a teeny bit, gets chipped away," the Globe article concluded. "It's something we become more familiar with as we age, even if it's a feeling we don't ever really know how to deal with.

"And this is something, I'm afraid, there is no cure for."