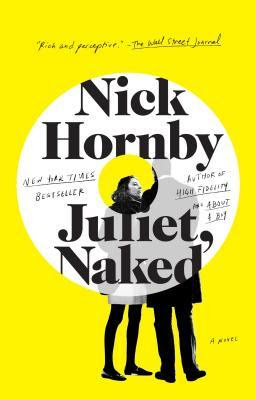 When I heard there was a movie version of Nick Hornby's novel "Juliet, Naked" coming out, I decided I'd like to see it. I'd previously read both "High Fidelity" and "About a Boy" by Hornby after seeing and enjoying the movie versions.  (I also saw "Fever Pitch" with Drew Barrymore & Jimmy Fallon, although I never read the Hornby book it was based on.)

This time around, I thought I'd try to get the novel read before I saw the movie (and, moreover, cram it into the few days in between when I finished my most recent book (reviewed here) and Sept. 11th, when "Fear: Trump in the White House" by Bob Woodward came out.  ;) I finished the book in three days flat (started Friday, finished this afternoon). :)

(As it turns out, I needn't have rushed:  "Juliet, Naked" the movie is only playing in three theatres in the GTA at the moment -- none of them anywhere near me (albeit one of them is near where we lived before we moved). Hmph.)

Pop culture and music are often themes in Hornby's books, and this one is no exception. The plot:  Main characters Annie & Duncan have lived a humdrum existence together for the past 15 years in a small town by the seaside in England. Duncan's life revolves, not around Annie, but his obsession with an American singer/songwriter, Tucker Crowe, who disappeared from public view at the height of his fame, 30 years ago. When Crowe releases a new album -- a stripped down/demo version of his most famous work -- Duncan is ecstatic. Annie is less impressed (not to mention fed up with Duncan), and publishes an online critique of the album on Duncan's favourite fan forum, which sets off a string of events that change everything for her, Duncan -- and Tucker Crowe.

I have to admit, I was taken aback, not far into the novel, when the topic of childlessness popped up. (And then again later on, when pregnancy loss (not Annie's) made an appearance.)  I'm not sure why I was surprised -- after all, childless/freeness was a major theme in "About a Boy" too.)  Approaching her 40s, Annie finds herself longing for a child:


The decision not to have children had never been made, and nor had there been any discussion resulting in a postponement of the decision... Annie could imagine herself as a mother, but Duncan was nobody's idea of a father, and anyway, neither of them would have felt comfortable applying cement to the relationship in that way. That wasn't what they were for. And now, with an irritating predictability, she was going through what everyone had told her she would go through: she was aching for a child. Her aches were brought on by all the usual mournful-happy life events: Christmas, the pregnancy of a friend, the pregnancy of a complete stranger she saw in the street. And she wanted a child for all the usual reasons, as far as she could tell. She wanted to feel unconditional love, rather than the faint conditional affection she could scrape together for Duncan every now and again;  she wanted to be held by someone who would never question the embrace, the why or the who or the how long. There was another reason, too: she needed to know that she could have one, that there was life in her. Duncan had put her to sleep, and in her sleep, she had been desexed.

She'd get over all of this, presumably, or at least it would become a wistful regret, rather than a sharp hunger. But this holiday hadn't been designed to comfort her. There was an argument that you might as well change nappies as hang out in men's lavatories taking pictures. The amount of time they had for themselves was beginning to feel sort of... decadent.


The cliche had it that kids were the future, but that wasn't it: they were the unreflective, active present. They were not themselves nostalgic, because they couldn't be, and they retarded nostalgia in their parents. Even as they were getting sick and being bullied and becoming addicted to heroin and getting pregnant, they were in the moment, and she wanted to be in it with them. She wanted to worry herself sick about schools and bullying and drugs.

I could relate to this section, where Annie reflects on the photos from her recent American vacation with Duncan (a Tucker Crowe-focused pilgrimage)(it reminded me of Jess's recent post about photos):


Annie scrolled back through the photo library on her computer and started to wonder whether her whole life had been a waste of time. She wasn't, she liked to think, a nostalgic, or a Luddite. Sher preferred her iPod to Duncan's old vinyl, she enjoyed having hundreds of TV channels to choose from, and she loved her digital camera. It's just that, in the old days, when you eventually got your pictures back from the drugstore, you never went backward through time. You shuffled through the twenty-four holiday snapshots, only seven of which were any good, put them in a drawer and forgot about them. You didn't have to compare them to every other holiday you'd had in the past seven or eight years. But now she couldn't resist it. When she uploaded or downloaded or whatever it was you did, the new photos took their place alongside all the others, and the seamlessness was beginning to depress her.

Look at them. There's Duncan. There's Annie. There's Duncan and Annie. There's Annie, Duncan, Duncan, Annie, Duncan standing at a urinal, pretending to pee...Nobody should have children just because it made the photo library on the computer more interesting. On the other hand, being childless meant that you could, if you were in a negative frame of mind, come to the conclusion that your snapshots were a little on the dull side. Nobody grew up or got bigger;  no landmark occasions were commemorated, because there were none. Duncan and Annie just slowly got older, and a little fatter. (She was being loyal here. She hadn't gotten much fatter at all, she noticed.) Annie had single friends who'd never had kids, but their holiday photos, usually taken in exotic locations, were never boring -- or rather, they didn't feature the same two people over and over again, quite often wearing the same T-shirts and sunglasses, quite often sitting by the same swimming pool in the same hotel on the Amalfi coast.

Beyond childlessness (as well as some thoughts on parenting, art and obsessive fan worship), the novel explores the questions that many of us (childless or not) face as we head into midlife: What makes life meaningful? How do you shake off years of inertia, seize the initiative & start being an active participant in your own life? And what happens when (even despite your best efforts) life doesn't turn out the way you thought or hoped it would?

Some choice quotes from the book along these lines:


Tucker didn't want to think about whether they'd be starved out if they couldn't drive anywhere. He wanted to think about how old he was, and how he was going to die soon, and how his whole life seemed to have slipped away without him noticing.

In the last e-mail Annie had sent to Tucker, she'd posed the following question:  What do you do if you think you've wasted the last fifteen years of your life?

She and Duncan had ended up together because they were the last two people to be picked for a sports team, and she felt she was better at sports than that.

For the best part of 40 years she had genuinely believed that not doing things would somehow prevent regret, when, of course, the exact opposite was true.

There was an awful lot to be said for familiarity, if you thought about it. It was an extremely underrated virtue, ignorable until the very moment that you were in danger of losing whatever or whoever it was that was familiar—a house, a view, a partner.

In some ways, this book was quite typical Nick Hornby -- and at the same time, not at all what I had expected. I enjoyed it, and I gave it four stars on Goodreads.

I will let you know what I think of the movie, if/when I get to see it. (It stars Rose Byrne, Chris O'Dowd and Ethan Hawke as Annie, Duncan and Tucker, respectively, which seems like pretty good casting to me!)