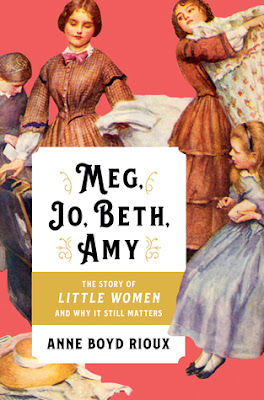 "Meg, Jo, Beth, Amy: The Story of Little Women and Why It Still Matters"  by Anne Boyd Rioux was in my TBR pile for a while, but got moved up in anticipation of the new movie version of "Little Women," starring Saoirse Ronan as Jo, Emma Watson as Meg and Laura Dern as Marmee. I was still in the middle of reading it when I went to see the movie this past weekend with my SIL.

I'll get back to the movie shortly... first, the book!

I probably would have read this book eventually even without the prompt of the new movie, because "Little Women" is one of those books I read as a child that has always stayed with me.  I got an abridged version as a gift on my 6th or 7th birthday -- read the full thing later, several times (although not in quite a while now) -- and I sometimes wonder if Jo March was my original inspiration for wanting to be a writer.

"Meg, Jo, Beth, Amy" is, as the subtitle says, a collection of essays about the phenomenon of "Little Women" and why it still matters, 150 years after it was first published (in 1868). Rioux explores how Alcott came to write "Little Women,"  how closely it reflected her own life (and how it didn't) and how the book (and its subsequent sequels) was initially received by both critics and audiences around the world.  She looks at how the book has gained new life through stage, screen (movies & TV) and radio adaptations, how each version differed from its predecessors and how they were received.  There are chapters on on the book's lasting cultural and literary impact, and on differing readers' interpretations of the novel.  There's an absolutely fascinating chapter called "Can Boys Read 'Little Women'?" (echoing some recent articles I read asking why men aren't going to see the latest film version). Of course they CAN, but they generally DON'T and Rioux delves into the reasons why. She also writes about what the book has to say about the female experience and how girls grow up into women (then and now), and how "Little Women" continues to have an impact on girls' stories today ("Harry Potter"'s Hermione, "The Hunger Games," "Gossip Girl" and "Gilmore Girls" and Lena Dunham's "Girls" are among the modern female-focused stories discussed that were influenced to some extent by "Little Women").

If you're a fan of "Little Women" (as I am) or the subject of women in literature generally, you will enjoy this book.  I did, and I gave it four stars on Goodreads.

Now, about the movie!  I've seen quite a few of the many filmed versions of "Little Women," in full or in part, most recently the one that aired about a year ago on PBS, with Maya Hawke -- daughter of Ethan Hawke & Uma Thurman (!) -- as Jo. That one was pretty good, and the 1994 version with Winona Ryder as Jo and Christian Bale as Laurie is probably my favourite -- but this one ranks right up there, and definitely deserves the critical praise it's getting. It's beautifully filmed and acted. One  small quibble -- I was glad I was familiar with the story, because it's not a straightforward linear retelling -- the screenwriter chose to jump back & forth in time with the story, and that might be slightly confusing if you're completely new to it. (Take Kleenex.)