"The Dutch House" by Ann Patchett 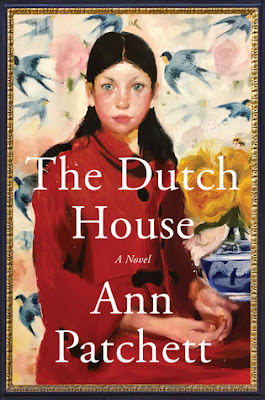 I think I may have first heard about "The Dutch House" by Ann Patchett from Modern Mrs. Darcy -- and then my former boss mentioned in an email that she took it with her to read on a trip to St. Lucia this fall. I asked her how it was, and she said it was good.

Then I saw it on sale at the local mega-bookstore (where it's a "Heather's Pick"-- a guaranteed good read) and I decided to pick it up on our first visit back from Christmas holidays. I had Ronan Farrow's "Catch and Kill" in mind for my next read -- but the girl in the red coat on the cover was calling to me. ;)  I guess I was craving a good fiction read. Once I started it, I found it very hard to put down, and found myself racing through the final 1/3 of the book.

"The Dutch House" of the title is an enormous house in the suburbs of Philadelphia, built by a tobacco magnate and bought, complete with furniture and full closets, after the Second World War by Cyril Conroy, a rising real estate tycoon, as a surprise for his wife, Elna.

One of the themes that runs throughout the book is that actions, no matter how well intended, can have unintended/unforeseen consequences. Instead of bringing the family together in triumph, the house becomes their undoing. Unnerved by the house and the family's sudden wealth, Elna leaves Cyril and their two young children, Maeve and Danny (the book's narrator). The siblings' bond is strengthened by their mutual loathing of their stepmother, Andrea, who throws them both out of the house and back into poverty after Cyril's death.  Over the decades that follow, the memories of the house, and the desire for revenge, remain an obsession for the siblings. Night after night, they park in front of the house;  over and over again, they retell old stories and talk about what they've lost. “We had made a fetish out of our misfortune, fallen in love with it,” Danny observes.

On the face of it, this is a simple book (the New York Times review calls it "a modern fairy tale"), but it's actually quite complex and multilayered, with some wonderfully drawn characters.  It's about families, and how patterns of behaviour repeat themselves over time and from generation to generation. It's about holding grudges, and the power of forgiveness.  It's about memory and the passage of time, and about how even the closest siblings can experience growing up in the same family very differently.

The NYT review quotes Patchett from a 2016 profile in The Guardian, saying “I’ve been writing the same book my whole life -- that you’re in one family, and all of a sudden, you’re in another family and it’s not your choice and you can’t get out.” Isn't that so true? The family we grew up in, the family of our childhood memories, is not the same family we wind up with.  Families -- even the ones that remain relatively intact, avoiding divorce and early death -- morph and change as we all change over time. Says Danny:  "We overlay the present onto the past. We look back through the lens of what we know now, so we're not seeing it as the people we were, we're seeing it as the people we are, and that means the past has been radically altered."

I found the ending just a wee bit unrealistic... but it did not detract from the overall power of the story or my enjoyment of it. This was the first book I've read by Ann Patchett. I don't think it will be the last. Five stars. :)  I think it would make a great book club read!

I flagged this passage with a Post-It note... I think CNBCers, married or not, will relate:

What I didn't appreciate was that Celeste took such issue with Maeve not coming into the city, when Maeve coming to be with us was the last thing she wanted. "She's too busy with her important job in frozen vegetables to come here for the day? She expects you to drop everything -- your business, your family -- and run to her when she calls?"

...What was never said but was perfectly clear was that Maeve had no husband, no children, and so her time was less valuable. (p. 238)