"A Very Stable Genius" by Philip Rucker and Carol Leonnig 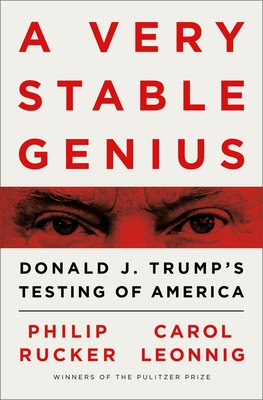 I finished reading "A Very Stable Genius: Donald J. Trump's Testing of America" earlier today -- just as the U.S. Senate voted not to hear further evidence or witnesses in the president's impeachment trial.

Authors Philip Rucker and Carol Leonnig are both Pulitzer Prize-winning reporters at the Washington Post. (A tidbit I gleaned from the last sentence of the acknowledgements at the book's end: apparently Rucker was a competitive figure skater in his youth!!)  Their book covers the first 2.5 years of Donald Trump's presidency (more or less chronologically), ending with the public release of the Mueller report. The epilogue briefly covers the infamous Zelensky telephone call and the beginnings of impeachment proceedings. It's similar to both "Fire and Fury" by Michael Wolff and Bob Woodward's "Fear" -- both of which I've read & reviewed on this blog -- with behind-the-scenes insider insights gleaned from interviews more than 200 sources. (Some are named, some not. It's pretty easy in some cases to guess who they talked to.)

The New York Times review called it "a comic horror story," and yes, sometimes it's hard to know whether to laugh or cry over its revelations.  "It’s as if the president, as patient zero, had bitten an aide and slowly, bite by bite, an entire nation had lost its wits and its compass," the NYT says.

The most infamous stories from the book have been well reported -- but there were still plenty of anecdotes and insights to keep me turning the pages.  It's easy reading in terms of the quality of the writing and reporting -- perhaps not so easy in terms of reliving the Trump presidency, incident by mind-numbing incident. Anyone who goes to work for this White House must know, on some level, what they're getting into, which makes it hard to feel too sorry for them -- but I'll admit there's part of me that winced as I read about the behind-the-scenes chaos they had/have to endure every day.  Talk about toxic work environments...!

There's a quote in the epilogue that struck me as particularly relevant to the moment (especially as I watched the Senate vote down the prospect of hearing further testimony):

"We haven't seen anything like this in my lifetime. He appears to be daring the rest of the political system to stop him -- and if it doesn't, he'll go further," William A. Galston, a senior fellow in governance at the Brookings Institution, told The Washington Post's Robert Costa.

"What we're discovering is that the Constitution is not a mechanism that runs by itself," Galston added. "Ultimately, we are a government of men and not law. The law has no force without people who are willing to enforce it." (p. 416)

Between reading this book and following the Senate trial, I must admit I'm feeling rather pessimistic right now about the future for my southern neighbours (and, by extension, the rest of us) -- certainly (at minimum) for as long as Trump remains president. I hope history proves me wrong.