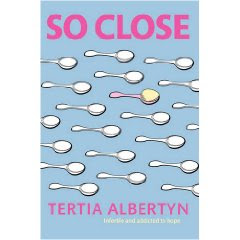 It's an infertile booklover's paradise out there right now, with new books from our very own ALI blogging Den Mother/Stirrup Queen Melissa, as well as Pamela Jeanne, hitting the shelves this month. A little earlier this year, however, another blogger's book finally became available to us in North America -- "So Close" by Tertia Albertyn of South Africa. Mel is hosting a "book shower" for Tertia today on her blog -- and this was one shower that I was happy to attend!

I first encountered Tertia some years ago on an Internet message board for IVF "vets." I mostly lurked there, as (having never done even one IVF), I did not think I met their qualifications to post as a "vet." However, having struggled to become pregnant (naturally), lost a baby to stillbirth, suffered through the indignities of the infertility workup, and endured several rounds of Clomid, followed by three IUIs with injectable drugs before almost cracking under the strain and finally making the difficult decision to live childless/free, I most certainly could relate to their anti-baby-dust mindset and their need to vent at the world from time to time -- particularly their often jaw-dropping tales of mistreatment by the oblivious fertile world.

Tertia was among the most vivid personalities on the board. Her posts -- like her book -- crackled with irreverent humour, blunt honesty, justifiable rage and colourful language. When I first began exploring the world of infertility blogs a couple of year ago, hers was one of the first blogs I discovered & bookmarked. Her descriptions of the ups and downs of fertility treatment are bang on.

I knew that Tertia eventually succeeded in her quest to have a family -- but there was much that I didn't know about how she got there. Suffice to say that Tertia most definitely qualifies for the title of "veteran." You name it, she's probably been through it (& then some) -- including 9 (!!) IVFs & several lost babies before the birth of her twins, Adam & Kate. (If you follow her blog, you'll know that she is currently due any day now with her third baby.) It's an amazing story that deserves to be read, not only by infertiles but by anyone wanting to know why we put ourselves through this, and where the strength to keep on trying comes from.

Mel has asked each of us attending Tertia's shower to answer one question from a list that she circulated. Here's the one I picked:

The title for the book as well as the title of Tertia's blog comes up on page 97 when she explains that she can't give up because she's so close. Um...I actually just wanted to throw this out there in case someone wants to run with the idea of being "so close."

Unlike Tertia, I did eventually "give up"... and while my infertility & loss resume is far shorter than hers (the closest I came to parenthood was my one & only, naturally achieved pregnancy, which ended in stillbirth at six months) -- I too had the lingering feeling that I had come so close, so very close, to having the baby I so desperately wanted.

Back in the late 1990s/early 2000s, I was a member of an e-mail forum for women who had lost pregnancies & were contemplating or actively trying for a subsequent pregnancy. That's where I met Julia S., as well as another author (and now blogger), Ann Douglas.

When Ann began writing her book "Trying Again," published in 2000, she asked the members of our forum to be part of her "parent panel" -- which involved answering a series of detailed questionnaires about our experiences with pregnancy loss and trying again. I was happy to participate, & thrilled to recognize myself in the pages of her book. This is one of the quotes Ann selected for her book that came from me (on page 144, in a section dealing with feelings of inadequacy and that your body has betrayed you)(I hadn't looked at it for a long time, & wow, talk about (a) topical for this post & (b) prophetic...!):

"My body betrayed me when it failed to sustain my baby. Now it's failing me again by not giving me another chance at pregnancy. I am very afraid that Katie was my one shot at motherhood and I blew it. What an awful feeling to be so close [emphasis mine here] to something you've wanted for so long, only to have it snatched away, with no reassurances that you'll ever have anything like it again. With every passing month, I feel my hope of having a baby slip further and further from my grasp."


Like Tertia, coming "so close" to holding my baby in my arms drove me onward (as my biological clock ticked ever-louder), first to charting my temperatures, then to infertility testing and treatment. But (as I said in the book) as time went on, I began to realize that I wasn't getting any closer to grabbing the brass ring. Instead, I could feel it slowly slipping from my desperate grasp -- drifting further and further away -- as my eggs aged, my bank account dwindled and, frighteningly, my sanity began slipping away too.

Yes, I was so close -- close, but no cigar, as the old saying goes (and how ironic -- given the old tradition of passing out cigars on the birth of a new baby...!)(Laura Secord actually has (or at least, they used to have) milk chocolate cigars, wrapped in pretty pink or blue foil & sold by the box, that you can distribute in lieu of tobacco. I can't tell you how often I used to eye those cigars in the store, thinking, "Some day... some day...")

I've moved on in a different direction with my life these past eight years -- down a road less travelled. I'm not always sure of where I'm going or how I'm going to get there... although the journey to date has been interesting, to say the least! I've found new interests and new adventures to fill my days.

But that tantalizing feeling of coming "so close" to fulfilling that other dream will probably haunt me for the rest of my time here on this earth.

How close do you/did you feel to achieving your family goals? Do you think there will ever come a time when you decide to stop treatment? If that time has already come, how did you know & what has happened since then?

Now, hop on over to Melissa's blog to find out who else is attending the party -- & then visit their blogs to find out what gifts/insights they've brought!
Posted by loribeth at 7:45 AM