"Florence Foster Jenkins" and the power of chasing a dream 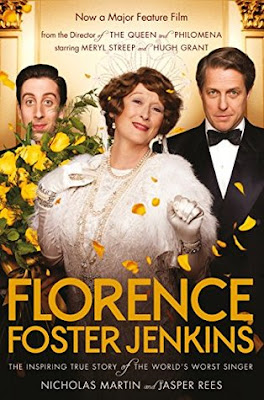 Dh & I are generally avid moviegoers, but it's been a busy summer -- and, quite frankly, there haven't been a lot of movies around lately that we've really wanted to see. Happily, that is changing. :)

The first movie we saw after our return from our recent road trip was "Florence Foster Jenkins," starring Meryl Streep, Hugh Grant and Simon Helberg (better known as Howard on "The Big Bang Theory"). I had heard a bit about the movie and the true story it was based on, and seen a couple of trailers, and a few days before we went, I picked up the book that provided the source material for the script, "Florence Foster Jenkins" by Nicholas Martin and Jasper Rees. It's the type of quirky, real-life story that I love.

Florence was a wealthy New York socialite and patron of the arts who fancied herself an opera singer -- and actually gave a sold-out concert at Carnegie Hall shortly before her death in 1944. To put it mildly, she was not. You can find some of her recordings on YouTube if you care to hear the proof. In fact, some have dubbed her "the world's worst singer." She was enabled in her delusions of grandeur by her common-law husband, the second-rate actor St. Clair Bayfield (Hugh Grant), who worked tirelessly to encourage and protect her, and people in the arts community who relied on her generous patronage. We first hear her sing at the same time aspiring pianist/composer Cosme McMoon does (Helberg -- who really does play piano in the movie!), when he auditions to become her accompanist. The expression on his face when she opens her mouth and lets out those first few off-key notes is priceless (and possibly Oscar-worthy). I have to admit I laughed so hard I had tears streaming down my face.

But while there is humour in the movie, it's not played strictly for laughs. Streep does a marvellous job (as usual...!) of conveying Florence's sincerity and underlying fragility. It's funny, it's a bit sad in parts, and it's touching.

There's a scene in the movie where Florence has just confessed to the new doctor treating her that she has syphilis, contracted from her first husband on her wedding night. (It's suggested in the book that the disease may have had an effect on her hearing, and singing.)  In those days, pre-penicillin, there was no cure for syphilis, and Florence lived far longer than most people with the illness. As a result, her common-law marriage/relationship with St. Clair Bayfield was of a non-sexual nature.

After the doctor leaves, she & St. Clair are talking and she expresses how she wishes she could have given him a child. "We could have been a family," she says sadly. "We ARE a family," he assures her. (Hugh Grant is also amazingly good here.)  The exchange reminded me of another Meryl Streep movie, "Julie & Julia," where she played the wistfully childless Julia Child, supported by her loving husband Paul (Stanley Tucci). (My post about "Julie & Julia" remains my all-time most viewed and commented upon, and continues to draw traffic and comments.)

There's nowhere in the book or the movie where Florence's childlessness is specifically linked to her musical obsessions, but it's easy to see that music filled a void for her (just as food and cooking filled a similar void for Julia Child). "Music is and always has been my life," she says. We believe her.

Reflecting on the movie later, I was also reminded of Tracey Cleantis's book "The Next Happy" (which I reviewed here), about the sometimes destructive power of chasing your dreams and how to let them go. Unlike most of us, Florence had the money and the social clout to keep following her improbable dream long after most of us would have had to throw in the towel. It's suggested in both the book and the movie, though, that being confronted with the negative reviews of her Carnegie Hall concert, and the realization that people were laughing at her, shattered her illusions and ultimately contributed to her death a few months later.

Nevertheless, Florence's story also reminds us that we can find value and meaning in doing what we love to the best of our ability -- even if we know we'll never be truly great at it.  People recognized that Florence's singing was sub-par (even if she never did) -- but (as the movie shows) they also admired her can-do spirit and determination. "People may say that I couldn't sing. But no one can say that I didn't sing," Florence observes with a smile at the movie's end (a quote attributed to the real-life Florence).

The book was interesting in filling out the details of Florence's life, but unless you're really curious about her and the times she lived in, you can probably go straight to the movie (which I would happily recommend).