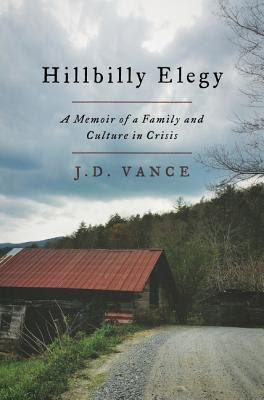 I'm not sure what compelled me to pick up "Hillbilly Elegy: A Memoir of a Family and Culture in Crisis" by J.D. Vance. I'd already flagged "White Trash: The 400-Year Untold History of Class in America" by Nancy Isenberg as something I might want to read, and this seemed to cover similar territory in memoir form -- a genre I've always enjoyed -- with a personal focus on the experiences of one man & his family.

After first seeing it in the bookstore a couple of weeks ago, I began hearing buzz about it. This book, it has been said, helps to explain the political rise of Donald Trump. Explain the inexplicable?? ;)  That's a tall order, but OK, I'm hooked. ;)  Once started, I found it hard to put down. It was the fastest read I've had in some time, and I finished it in less than two days.

Vance grew up in a steeltown in southwestern Rust Belt Ohio, where his Kentucky-born grandparents moved in the years after World War II in search of work and better opportunities for their family. But he has always considered Kentucky "home," and has scads of relatives there.

(As an aside:  I read the first few chapters of the book with the dawning "holy crap" realization that Vance's mother Bev & I were probably exactly the same age -- i.e., in a different world, I could have a 31-year-old son. Yikes!!  Vance confirmed this on page 39 -- "Mom was born January 20, 1961 -- the day of John F. Kennedy's inauguration."  I'm actually a little over a week OLDER than she is. Gulp.)

Mom instilled a love of learning in her son and, despite a teenaged pregnancy and early marriage, attended community college and became a licensed practical nurse. Unfortunately, she also became a drug addict, married at least five times and had many more boyfriends parading through the lives of Vance & his older sister. Grandpa (Papaw) was an alcoholic who reformed only after his wife doused him with gasoline and set him on fire while he was asleep after one too many. And his family's story was far from unusual in the community where he grew up.

Vance credits a number of people -- in particular, his sister, his aunt and, most of all, his gun-toting, foul-mouthed grandmother, Mamaw -- for helping him survive in this chaotic world -- and succeed outside of it. Mamaw told him he could do anything he wanted to, encouraged (demanded!) him to go to college, and even paid for golf lessons because she knew "that's where rich people do business."  Vance wanted to go to college -- but he also knew he wasn't ready for the demands of college and adult life generally -- so he signed up for the Marines, which included time in Iraq. It was, he says, the best thing that ever happened to him. Four years later, with the support of the Marines and his family, he was off to Ohio State University -- and from there to the rarefied and alien world of Yale Law School. (Interesting side note: One of his profs and mentors there was Amy Chua, the infamous Tiger Mother, who contributes a blurb to the book's back jacket.)  He now works for an investment firm in Silicon Valley.

Vance is immensely proud of his "hillbilly" roots & culture -- but he is not blind to its faults. He believes that a culture of "learned helplessness" has taken root among his people -- the belief that the deck is stacked against them (so why make an effort?). Unlike some conservatives, he does see a place for public policy solutions (and he offers some thoughts on subjects that include social services and education). He also thinks churches could be doing more to support their communities.  But he also strongly believes that people need to learn to take responsibility for their own choices.

This was a well-written, entertaining and thoughtful book that deserves the buzz it's getting, and I am very glad I read it (and didn't wait for the paperback, lol). You may not entirely agree with Vance's ideas, but you will probably learn something, and he will make you think.

ALI note: Vance's Mamaw & Papaw married as teenagers in 1947. Vance later learned that Mamaw had been pregnant, and the pregnancy was likely one reason why the couple left Kentucky for Ohio.


In later years, Mamaw sometimes spoke of a daughter who died in infancy, and she led us all to believe that the daughter was born sometime after Uncle Jimmy, Mamaw and Papaw's eldest child [born in 1951]. Mamaw suffered eight miscarriages in the decade between Uncle Jimmy's birth and my mother's. But recently my sister discovered a birth certificate for "Infant" Vance, the aunt I never knew, who died so young that her birth certificate also lists her date of death. The baby who brought my grandparents to Ohio didn't survive her first week. On that birth certificate, the baby's brokenhearted mother lied about her age. Only fourteen at the time and with a seventeen-year-old husband, she couldn't tell the truth lest they ship her back to Jackson or send Papaw to jail.

Mamaw's first foray into adulthood ended in tragedy. Today I often wonder: Without the baby, would she have ever left Jackson? Would she have run off with Jim Vance to foreign territory? Mamaw's entire life -- and the trajectory of our family -- may have changed for a baby who lived only six days.  (page 27)

Reading this book reminded me of an excellent multi-part documentary I saw on PBS Frontline about 10 years ago called "Country Boys," following two teenaged boys growing up and struggling to finish high school in rural Kentucky.  I wonder what has happened to them in the years since then?