"Fear: Trump in the White House" by Bob Woodward 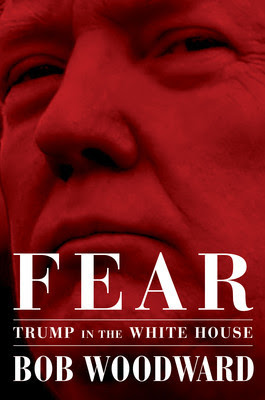 "Fear: Trump in the White House" -- the highly anticipated, recently released book by Bob Woodward -- is similar in many ways to Michael Wolff's "Fire & Fury" (which I read earlier this year & reviewed here) -- both of them fly-on-the-wall looks at the Trump White House during its first two years.

The difference, of course, being that this was written by BOB WOODWARD, of Woodward & Bernstein fame -- you know, the guys who doggedly investigated a mysterious little break-in at the Watergate Hotel in Washington back in the early 1970s, which eventually led to the resignation of a  president. I've read several of Woodward's previous 18 books (with & without Bernstein & others), including the first (and best), "All the President's Men" (which I re-read last year & reviewed here).

We might be able to brush off the gossipy books written earlier this year by Wolff & by Omarosa Manigault-Newman (who clearly had an axe to grind).  But when we hear the same sorts of stories from Bob Woodward, distinguished Pulitzer Prize-winning journalist, it's clear that something is happening at the White House, and that we should all pay careful attention.

As Woodward himself said in an interview with CBS Sunday Morning, "People better wake up to what's going on."

In anecdote after anecdote, example after mind-numbing example, Woodward demonstrates that (as Chief of Staff John Kelly is said to have remarked) "We're in crazytown."

“The reality was that the United States in 2017 was tethered to the words and actions of an emotionally overwrought, mercurial and unpredictable leader,"  Woodward writes. "Members of his staff had joined to purposefully block some of what they believed were the president’s most dangerous impulses. It was a nervous breakdown of the executive power of the most powerful country in the world.”

Unlike Wolff & Manigault-Newman's books, Woodward's was meticulously researched and documented, with his methodology explained up front, and notes and an index at the back.  As Woodward explains in the Notes section, most of the book is based on "multiple deep background interviews with firsthand sources." "Deep background" means the source agreed that all the information provided could be used without his or her identity being revealed (although it's not hard to identify who some of the sources might have been).  Most of the interviews were taped with the sources' consent (and later transcribed). Meeting notes, files, personal diaries and both government and personal documents were also used to provide a fuller picture. (Not only does Woodward describe how Gary Cohn and Rob Porter conspired to remove a critical letter from the President's desk before it was signed and sent -- from which we can infer that Cohn, Porter or both told him about the incident, in great detail -- he actually shows us an image of the unsigned letter.)  Other sources are documented in the notes section at the back.

The final sentence of the book is a killer.

I gave it 4 stars on Goodreads.