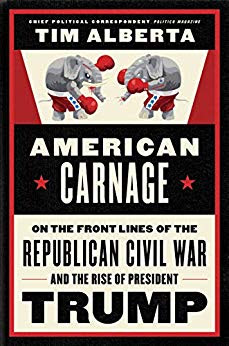 While I was able to whiz through Margaret Atwood's "The Testaments" in under 24 hours (review here), it took me a full month & a half to slog my way through "American Carnage: On the Front Lines of the Republican Civil War and the Rise of President Trump"  by Tim Alberta, the chief political correspondent for Politico magazine.

The book has been well reviewed, both in the media and on reader forums such as Goodreads (current average rating 4.21 stars).  I gave it four stars on Goodreads myself.  I found it interesting -- full of great tidbits and insights -- well written and well sourced, with contributions from (among others) John Boehner, Paul Ryan, Ted Cruz, Marco Rubio, Jeff Flake, Mitt Romney and Will Hurd. It's a compelling explanation of how American politics evolved (devolved?) over the past decade or so to its current sorry state.

But... it was LONG -- almost 700 pages (!) -- including more than 600 pages of text, plus acknowledgements, footnotes and index. Plus, it wasn't just 700 pages -- it was 700 pages ABOUT TRUMP. I rest my case, lol. (I was amused to turn to the acknowledgements section at the end and find it began with a "Whew" and an apology for the lengthiness, lol. As a long-winded writer myself, I could relate...!) There were also some typos throughout the book that detracted from my enjoyment of it somewhat. (Do publishers not send books to proofreaders anymore these days??  I am seeing so many more errors than I used to lately...!) Thus, four stars and not five.

The book is pretty much as the subtitle summarizes:  a detailed, critical look at the power struggles within the Republican party in the age of Trump. It begins with the election of Barack Obama in 2008, details the rise of Donald Trump and how the Republican Party establishment gradually bent itself to his will, and ends with the 2018 midterm elections and their fallout into early 2019.  As the book's description on Goodreads puts it:

It's both amusing and eye-rolling to read quotes from prominent Republicans who denounced Trump, pre-nomination and election in 2015-16 -- only to wind up, post-election, either strangely silent, praising him (*cough* Lindsay Graham), and/or even serving in his White House (e.g., Mike Pence, Reince Priebus, Mick Mulvaney...).

It was somewhat mind-numbing to read through the litany of Trump's/the Republicans' triumphs and disasters over the past several years, however well-chronicled.

And it was chilling to read former Speaker John Boehner's prediction, in the book's epilogue, that it will take another 9/11 -- or something even more catastrophic -- to restore Americans' sense of national unity and purpose.

Let's hope not. But overall, the book's sobering message is clear: it's going to take some time -- perhaps a long time -- for the pendulum of American politics to swing back to a more reasoned, moderate mode.