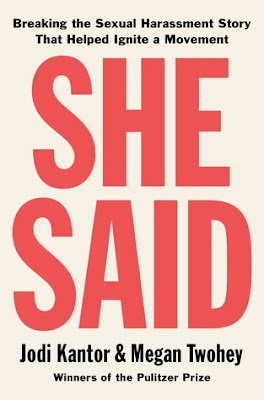 "She Said: Breaking the Sexual Harassment Story That Helped Ignite a Movement" by Jodi Kantor and Megan Twohey was one of those books that I snatched up as soon as I saw it on the bookstore shelf, and dived into reading as soon as I had finished my current book. It's not a terribly long book (260 pages of text), and it was a compelling read. I blazed through it in just a few days.

"She Said" is the story of how these two New York Times reporters investigated longstanding allegations of serial sexual abuse against  Hollywood producer Harvey Weinstein, culminating in a ground-breaking story published on October 5, 2017. There are no huge new revelations here (although several previously anonymous sources agreed to go on the record and be named in this book for the first time).  It's a behind the scenes look at how these two fine journalists pursued their story, cultivated their sources and encouraged them to go "on the record," uncovered disturbing patterns of behaviour that occurred over decades, and gradually built the case that led to Weinstein's downfall.

The book also chronicles the fallout from their reporting, the rise of the #MeToo movement and other related stories, including Christine Blasey Ford's allegations against Brett Kavanaugh during his Supreme Court confirmation hearings in September 2018.

As a one-time journalist/communicator myself, books like this are like catnip to me. :)  These women are as much my heroes (heroines?) now as Woodward & Bernstein were to me when I was a teenager. :)  Several reviewers, in fact, have drawn parallels between this book and Woodward & Bernstein's classic "All the President's Men" (reviewed here). Both books are classic case studies in how journalists do their jobs. (The technology used may have changed, but the basic techniques have not.)

Some reviewers have questioned the inclusion of Christine Blasey Ford's case in this book (as another example of women's testimony challenging powerful men, in the wake of the Weinstein revelations). I will admit, I felt like this was stretching the story out a bit -- but the behind-the-scenes look at Ford's decisions to come forward and then to testify, and her trip to Washington to do so, was irresistible.  Likewise, the final chapter -- a meeting Kantor & Twohey convened with many of their main sources at Gwyneth Paltrow's home in Hollywood to compare notes and share what had happened to them since the Times' stories were published -- might have been a little contrived, but it was still amazing to read about. (Oh, to be a fly on the wall...!)  It also reminded me of the comfort -- and power -- women who have gone through similar traumatic experiences gain when they find each other & tell their stories -- both online & in "real life" -- something those of us in the ALI community know very well!