"The Testaments" by Margaret Atwood 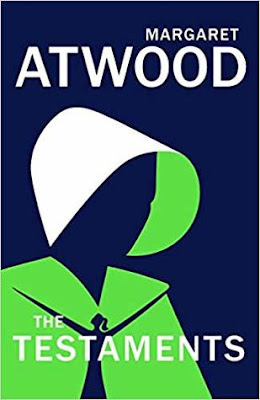 When I think about it, Margaret Atwood and "The Handmaid's Tale" is one reason why I began this blog, waaaayyyyyy back in late October 2007.  ;)  I'd been lurking for a while on Melissa's Stirrup Queens blog and commenting here & there. I think Mel & I corresponded a bit by email as well, and she encouraged me to think about starting my own blog.  At that time, Mel ran a regular online ALI-themed book club (then known as "The Barren Bitches Book Tour"), and I was dying to participate -- which was one reason why I eventually decided to set up my blog & hit publish on that very first post.  The next book club selection, which we discussed in early December that year, was (you guessed it) "The Handmaid's Tale." (You can read my contribution to that book club discussion -- including the story of my one brief encounter with Atwood herself, some 30+ years ago -- here -- and my other Handmaid's Tale-related posts here.)

And here we are, almost 12 (!) years later, "The Handmaid's Tale" is even more of a phenomenon than it was when it was first published in 1985 (the year I was married), thanks in part to the amazingly well done television adaptation (and NO thanks to The Donald & Friends!!) -- and now there's a long-awaited sequel, "The Testaments," released on Sept. 10th.

I snapped up a copy early that afternoon at the local mega-bookstore, on sale for a reasonable $25. (It came with a limited edition souvenir cloth tote bag -- the cover of the book is on one side, and on the other, the phrase "Under His Eye," lol.)  I decided I was going to finish the book I'd been slowly working my way through, before picking this one up... and maybe even do a re-read of "The Handmaid's Tale" first. Of course, I couldn't resist sneaking a peek... and before I knew it, it was four hours and 200 pages later, lol.  I finished it in less than 24 hours.

By now, you have probably heard a few things about the book. I don't think I'm giving away too terribly much if I tell you the events take place some 15-20 years after the end of "The Handmaid's Tale," and that the story unfolds through the different perspectives of three narrators -- a Gilead Commander's daughter, a teenaged girl from Toronto (fun to read the local references to Queen Street and Parkdale, etc.), and.... Aunt Lydia -- the one and the same character from the earlier book.

(Apparently Ann Dowd, who plays Aunt Lydia so wonderfully on the TV version of "The Handmaid's Tale," is one of the narrators of the audio version of "The Testaments" ...I have not yet gotten into audiobooks, but this might be a good one to start with, lol.)

I'm giving this one a solid 4 stars on Goodreads. I might have rated it slightly higher -- but it's hard to top the original.  It's a very good book, but I don't think it quite matches the original's greatness.  The plot that plays out in the last 100 pages or so is a wee bit on the improbable side (I kept thinking Margaret's been watching the TV version too much, lol).  The tone is lighter and far more hopeful than the original -- not quite so grim -- which, of course, is not a bad thing!

Overall, I enjoyed the book hugely, and I will admit to wiping my eyes at the end. If you wind up reading it, I would love to hear what you thought of it!