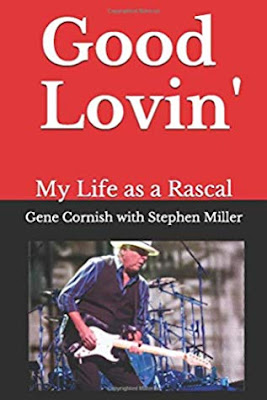 The first rock & roll album I ever owned -- a present for my 6th birthday -- was The Best of Herman's Hermits Volume 2.  :)  The second (a gift to my sister & me from either our grandparents or our uncle, I think) was "Groovin'" by the Young Rascals. We studied their faces & names on the back of the album cover and made up dances to go along with the songs. :)

I hadn't listened to that album in years, or given the Rascals much thought, until late in 2012, or perhaps sometime in early 2013, when I opened the Sunday New York Times and saw a full-page ad for a Broadway show/concert called "Once Upon a Dream," which was reuniting all four original members of the Rascals for the first time in 40 years.  The show was the brainchild/obsession of one of their biggest fans, Steve Van Zandt (of Bruce Springsteen's E Street Band), who was instrumental in getting the band named to the Rock and Roll Hall of Fame in 1997.

Seeing the familiar names & faces from the back of my album cover in the ad, after so many years, I felt a wave of nostalgia come over me. I started Googling the band and the show and looking up old clips on YouTube, and when they brought the production to Toronto in August that year, I dragged my dh to the beautiful old Royal Alexandra Theatre to see them. (You can read my post about the concert here).

They were FABULOUS -- absolutely no rust showing on these guys after so many years apart (and all of them pushing 70 at that point). Eddie Brigati, the longest reunion holdout of the four, brought the house down with his signature tune, "How Can I Be Sure?" Dh was agog watching the amazing drummer, Dino Danelli. Felix Cavaliere was a commanding presence at the Hammond organ, still with a first-rate voice. And nobody seemed to be enjoying themselves more than the guitarist, Gene Cornish (who was born in Ottawa and grew up just across the lake from Toronto in Rochester, New York).

The Rascals were hugely popular in their time, but unfortunately have never quite achieved the lasting fame of some of their peers. There's not much out there that's been written about them (although various members of the group have been rumoured to be their writing memoirs over the years). Finally, last fall, Gene Cornish published his -- "Good Lovin':  My Life as a Rascal" -- with the help of writer Stephen Miller.  (It's available from Amazon, both in paperback and on Kindle.)

Like so many kids of his generation, Cornish picked up a guitar after seeing Elvis Presley on television in the late 1950s. His mother took him to see Buddy Holly in 1958.  By the time he was in high school, he was a veteran of several bands in the Rochester area. With the support of his parents, he went to New York City where he landed a job with the Starlighters, the house band at Joey Dee's Peppermint Lounge. It wasn't long before he left with several of the other band members to form their own band -- the Young Rascals (eventually shortened to just the Rascals). (Replacing him in the Starlighters was a guy named Jimmy James -- later better known as Jimi Hendrix!)  Over the next year (1964-65), the Rascals honed their craft in clubs in New Jersey, Long Island and NYC, got a recording contract and began touring and making television appearances. Hit single after hit single followed -- until, sadly, the band imploded in the early 1970s under the stresses of constant touring, writing and recording, inter-band rivalries, poor management and bad business decisions.

Cornish, an only child, regarded (and still regards) the other three band members as his brothers. They have come through for him at various times and in various ways over the years since the band split up -- but like any family, they have also had some serious disagreements and betrayals. He's honest about how he saw their differences, as well as his own shortcomings. (It would be interesting to hear the others' versions of these same events...!)  After he and Danelli left the Rascals, they formed a couple of other bands together, including Bulldog and Fotomaker, as well as their own version of the New Rascals (touring at the same time as a rival version of the band led by Cavaliere). Cornish wound up broke, homeless, living in a small apartment with his mother, and addicted to cocaine. He finally kicked the habit in 2012 with the support of his new girlfriend (now fiancee), Debbee.

Then came "Once Upon a Dream," which was supposed to put the Rascals back in what Van Zandt saw as their rightful place as elder statesmen of rock and roll history. Unfortunately, while it was a great show that got rave reviews, it was extremely expensive to produce and take on the road, and Van Zandt pulled the plug in late 2013.

Since then, Cornish has teamed up with Cavaliere (and Vanilla Fudge drummer Carmine Appice) in yet another version of the Rascals. While on tour in Billings, Montana, in September 2018, he suffered a major heart attack while onstage. (He previously went through a quadruple bypass and colon cancer.) I am glad he's doing better, and that he finally got this book done. He will be 76 years old in May.

The book was self-published, and I'm afraid it could have used a good editor/proofreader -- there are numerous typos, misspelled names and redundancies.  It rambles at times -- at more than 500 (!) pages, the copy could have used some tightening up.  (I used to do this for a living, lol -- I couldn't help but notice!) And it's funny/sad how so many rock and roll memoirs resemble each other to the point of cliche -- the drugs, the infighting, the rise and fall and rise again...

Nevertheless, I enjoyed this behind-the-scenes look at a great '60s band that was part of my childhood musical memories. Some of the Rascals story was familiar to me through my online reading, but a lot of it was not, and there are lots of cameo appearances/anecdotes about other famous names (musical and otherwise) of the time. If you are a Rascals fan, this is (obviously) a must-read. You will also likely enjoy it if you're a fan of 1960s music or musical memoirs generally.