"A Life in Parts" by Bryan Cranston 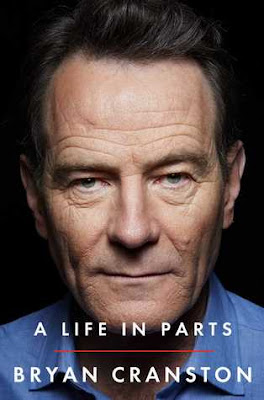 "A Life in Parts" by Bryan Cranston is my library book club's read for February (to be discussed at our upcoming meeting later this month).

I must confess, I have never seen a single episode of "Breaking Bad."  I do remember Cranston well as the harried father in "Malcolm in the Middle" and I recognize him from other, smaller parts on various TV shows ("Seinfeld," for one) over the years.

"A Life in Parts" is written as a series of episodes covering Cranston's life (more or less chronologically), each one focused on his particular personal or professional role at that moment in time. The headers read, for example, "Walter White," "Son," "Flea Marketeer," "Paperboy," "Universal Life Minister" (!), and so on.

Cranston's parents were both actors (his first professional gig was a United Way ad that his dad wrote, produced and directed). Their acrimonious split, when he was a child, was a turning point in Cranston's life. As interesting as Cranston's thoughts and memories of his acting life were to read about, the stories about his family and his personal life were equally engaging. We learn a lot about Cranston the actor -- how he has approached the roles he's played and built a long-lasting career -- but also about Cranston the son, brother, husband, father. It's funny, sad, thoughtful and absorbing -- an all-round great read.

This would be a must-read for any aspiring actor as well as "Breaking Bad" fans. (I enjoyed the book tremendously, but I wonder just how much more I would have appreciated it if I'd actually seen Cranston in his most famous role.)  If you just like a well-written memoir about an interesting and well-lived life, this would also be a good pick.

Four (4) stars on Goodreads. (Several reviewers there highly recommend the audiobook version, read by the author, if you enjoy those.)