"Catch and Kill" by Ronan Farrow 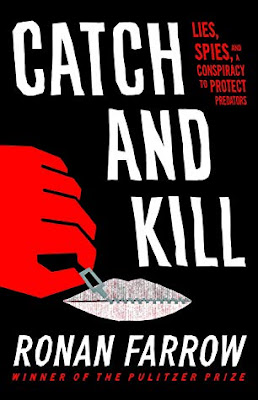 Daryl Hannah, Mira Sorvino, Annabella Sciorra, Rosanna Arquette, Ashley Judd... all actresses about the same age as me (give or take a few years) who launched promising acting careers in the 1980s & 1990s, and then just... disappeared. I assumed it was Hollywood sexism and ageism at work:  it's depressingly common for women over 40 to disappear in Hollywood, only to be replaced with younger models (paired with actors who are often decades older...!).

That may very well have been the case -- but, as I realized over the past couple of years, they had something else in common besides their age:  Harvey Weinstein.

Weinstein's abuse (sexual and otherwise) of vulnerable young women was an open but well-guarded Hollywood secret for decades, enforced by a culture of silence and complicity, as well as a plethora of monetary settlements paired with non-disclosure agreements (NDAs). The secret was finally forced out into the open in 2017, thanks to the bravery of the many women who finally came forward to tell their stories, and the dogged reporting of journalists like Jodi Kantor & Megan Twohey of the New York Times and Ronan Farrow at the New Yorker.

"Catch and Kill: Lies, Spies, and a Conspiracy to Protect Predators" is Ronan Farrow's first-person account of how he pursued the Weinstein story. It started as a routine assignment while Farrow was an investigative reporter at NBC.  He succeeded in persuading several women to tell their stories on camera (stories which reinforced each other and established a clear and disturbing pattern of predatory behaviour on Weinstein's part) -- only to inexplicably be ordered off the story by network executives and then lose his job altogether. He subsequently took the story to The New Yorker, and the rest is history.

The reasons why the Weinstein story made NBC so uncomfortable eventually became clear:  not only was the network subject to enormous pressure from the powerful Weinstein, it was hiding some skeletons in its own closets -- which ultimately came to light and led to the downfall of Today show host Matt Lauer, as well as several other network executives.

Farrow's work also led him to investigate American Media Inc. (AMI) (publisher of the National Enquirer and other tabloids) and its practice of "catch and kill" journalism which protected many rich and powerful men, including Donald Trump. He also writes here about Black Cube, an Israeli private investigation firm used by Weinstein to keep tabs on him and others, including many of Weinstein's victims. Throughout the book, Farrow's sister Dylan, an abuse survivor herself, keeps him on track and reminds him of what's important.

"Catch and Kill" is a personal memoir of sorts, but it's also a story about power and corruption and women triumphing over the men who would silence them.  It's about journalism and how reporters do their jobs and chase a story (a la "All the President's Men"). It's also a mystery/thriller that kept me turning the pages, waiting to find out what would happen next. I love memoirs, mysteries, great journalism and stories about strong women triumphing despite the odds -- so to find all these elements wrapped up in one great book was exhilarating. I knew a lot of the Weinstein story already, of course, having read the reports at the time. I'd also read Kantor & Twohey's book, "She Said" (also a worthy read -- reviewed here).  But knowing the eventual outcome (and reading Kantor & Twohey's book first) did not at all detract from Farrow's version of the story.

This was one of the most highly anticipated books of 2019 -- deservedly so. Five stars on Goodreads.