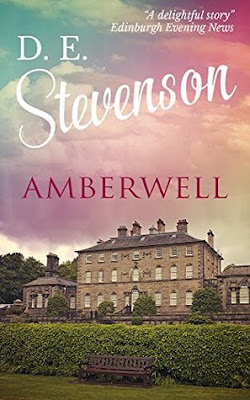 "Amberwell," first published in 1955, is the next book that my D.E. Stevenson book club will be reading and discussing together.

Amberwell, on the west coast of Scotland, has been home to several generations of the Ayrton family, each one seeking to improve and add value to the property for the next generation to enjoy and build upon. In the years between the two world wars, the family includes a set of distant, self-centred parents and five children -- two boys from Will Ayrton's first marriage and three girls from the second -- who are left to the care of their nanny and tutor and whose world revolves around the third-floor nursery and the vast grounds of Amberwell.

Mostly ignored and neglected by their elders (the girls in particular! -- grrrr....), the siblings bond with each other and with Amberwell itself. I love how the house becomes a beloved character in the story, and how the two older brothers, Roger and Tom, were so protective of their three younger stepsisters, Connie, Nell and Anne.  There's a wonderful scene in which the children, banished in great disappointment from the party their parents are giving to mark the installation of a grand decorative fountain, sneak out of the house in their pajamas & turn it on themselves to enjoy in the moonlight. When her sisters marry, and her brothers and servants leave to take part in the war effort, shy, awkward middle sister Nell becomes the glue that holds the estate and the family together.

This is a book that started slowly, but it grew on me, and by the time the two youngest Ayrton sisters reached their teen years, I was hooked. :)  Like most Stevenson novels, it's the literary equivalent of comfort food, but I found it absorbing and moving (more so than some of her other, lighter novels). I will admit to reaching for the Kleenex box a couple of times, especially towards the end. I could see it being adapted for a Masterpiece Theater run on PBS, lol.

There is a sequel, "Summerhills," which we will also be reading a few months down the road. I'll look forward to finding out more about what happens to the Ayrton family!

ALI alert:  Unmarried, childless and bitter Aunt Beatrice lives by herself in a flat in Edinburgh and comes to stay with the children for three months while their parents travel to South Africa. She's an unlikeable character who gets a bad rap (perhaps deservedly in some ways) -- and yet I found myself sympathizing with her. In Chapter 3, she tearfully unburdens herself on her youngest niece Anne (still a small child) and tells her story -- effectively warning young Anne not to accept a fate like hers. Her one suitor was turned away by the family as "not good enough for a Miss Ayrton," and she was forced to leave her beloved Amberwell when her brother (Anne's father) married and inherited the property.  Aunt Beatrice later becomes the catalyst for a disastrous episode involving Anne that tears the family apart.

Nell is another, more heroic childless aunt figure who brings up Roger's son at Amberwell (with the help of the family's faithful old Nannie) during the war.

Caveat:  I understand that some editions of this book -- including, unfortunately, the one from Endeavour that I was reading on my Kindle app -- have been abridged. :(  I would love to find an unabridged version, although I am not sure I could do so in time for our discussion...