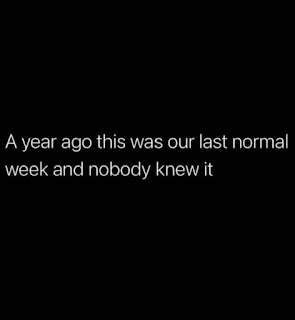 One year ago today was what I refer to as "The Last Normal Day."*  By that point, we knew we were on the verge of something big & ominous -- the World Health Organization had just officially declared a pandemic the day before (March 11th) -- but I don't think any of us had any idea of just how much our lives -- EVERYONE's lives, all over the world! -- were going to be affected -- or that we'd still be very much in the thick of things a full year later. It's... interesting... to go back & read over my blog posts from late February/early March last year and see how the growing pandemic started creeping its way into our individual and collective consciousness... (something I detailed in a recent post).

Thursday, March 12th, 2020, was the last day that was more or less filled with normal activities for me & dh.  We'd already done our usual grocery shopping on Monday -- but, given the rumblings in the news, we decided to go, again, and stock up on some staples. We went before noon and had some lunch in the food court area of the supermarket (as we often did, a few times a week -- pizza slice for him, soup for me), and then did our shopping.  It was already much busier than usual, people stalking the aisles with loaded carts and grim expressions. We were very glad we went when we did, because later that evening, and over the next few days, the TV news reports showed long lineups stretching around the perimeters of many local supermarkets, with increasingly empty shelves.

The toilet paper aisle was already completely empty. I couldn't resist taking a photo. (Here it is, in a blog post I wrote a few days later.) After we returned home and put away the groceries, we headed out again to the bookstore for a browse, Starbucks drinks in hand.  We're normally there at least once a week, often twice and sometimes three times. We didn't return to the bookstore until July, almost four months later, and since then, our visits have been a lot further and fewer between (with another three-month pause during our most recent lockdown, from early December to early March). We still haven't been back to Starbucks.

A few days later, on March 17th, the premier declared a state of emergency and issued a stay-at-home order that brought life to a standstill.  All non-essential retail stores (other than supermarkets & pharmacies) closed, and didn't start reopening again until mid-May, I think. We endured a second lockdown/stay-at-home order that began in mid-December and ended in mid-February (and a third may not be out of the question, with new, more contagious variants of the virus on the rise).

Even when things have been open, we've been staying close to home.  Dh did (and has continued to do) all the grocery shopping and prescription pickups at the pharmacy, and our trips to other stores (when they've been open) have been far & few between.  We still haven't gone to a restaurant, even in the summer when outdoor patio dining was available (nevermind indoor dining) -- or to a mall, or to a movie theatre. We didn't even start ordering takeout until our 35th anniversary on July 6th.  (We do that on Saturday nights now, in lieu of our usual weekly dinner out together.)  I'm sitting on almost $1,000 worth of cancelled/postponed/rescheduled show tickets: The Elton John farewell tour concert that SIL were supposed to attend in late March (2020) has been rescheduled for February 2022;  "Hamilton" was cancelled before our scheduled performance in mid-May, but I've hung onto my tickets because if/when they manage to bring the show back, I'll get first dibs on the new seats.

We have been so, so lucky, in many ways.  Being retired, there are very few reasons for us to venture out beyond our condo cocoon, other than medical appointments and to pick up the essentials. (And yes, haircuts!! -- when the salons have been open.  Of all the "material" things I've been deprived of over the past year, doing without regular haircuts has been the hardest to take, I think...!)  Being childless, we have not had to worry about children at school (or not at school)(although, on the downside, we haven't had the comfort or companionship of offspring, either... we've been a lot more isolated than the people we know with kids, even adult kids).  So far, dh & I and our immediate families have managed to stay safe & healthy (knocking wood!).  Only one member of our extended family & circle of close friends has had the virus (so far, that we know of)( = dh's cousin's husband).

But still, overall, this past year has been like nothing we could have reasonably expected or imagined.

Hope is on the horizon, with the rapid development, testing and now distribution of several safe and highly effective vaccines.  The rollout, however, has been painfully slow and muddled here in Canada, and certainly in Ontario, where we live (as we enviously watch our friends & neighbours in the U.S. and U.K. posting their vaccine selfies on social media...). While almost 10% of Americans have received both shots so far, less than 2% of the population here in Ontario can say the same. Health care workers and long-term care home residents and staff were first in line;  mass distribution to the rest of the population is only JUST beginning, with those over 80 going first. A couple of pilot projects are starting soon that will give the AstraZeneca vaccine to people aged 60-64 (i.e., dh & me) -- one through pharmacies and one through family physicians' offices -- but so far, none of the pilots are in the region where we live. Sigh.

Normally, we would spend at least a week or two in the summer with my family in Manitoba, as well as a week or so at Christmastime. So far, however, I'm pretty sure this will be the second summer in a row that I won't be going home.  (Crossing all my crossables for Christmas...!)  I have not seen my parents & sister since Christmastime 2019.  I've never been away from them this long before.  My parents are now in their 80s, and I am acutely aware, every time I see them now, that my time with them is limited...  Dh's aunts, uncles and cousins, as well as his stepmother and her family are all closer to us, of course -- some of them in the same community where we live -- but we haven't seen any of them in a full year now either.

We haven't even seen that much of BIL & SIL or our two nephews, even though they're all within a 10-minute drive away. While I don't think they have much to fear from us, they're all still going out to work, and the kids see their friends and go out with them to restaurants, etc. We moved here in April 2016, in large part because we wanted to be closer to them. Not having any kids of our own (and thus no prospect of grandchildren either), we hoped to forge closer connections with our two nephews -- and to get in on some of the fun when they started having their own families. Our Little Great-Nephew was born in mid-November 2019, but our time with him has been sadly limited because of the pandemic. We missed out on his baptism (we did get to see it via the church's YouTube feed), first Easter, first Halloween, first Christmas, and spent less than an hour with him, masked, on his first birthday.  He doesn't seem to know us or recognize us on the rare occasions that we do go there for a quick, masked visit. I suppose the masks don't help with the facial recognition...!

One thing I have been so thankful for this past year:  technology.  There was no such thing as the Internet during the 1919 pandemic -- many people still didn't even have telephones then. How much worse would this past year have been if we didn't have modern telecommunications to keep us informed, entertained and connected?  As an early pandemic meme said (something to the effect of), "Our grandparents were called to fight the Nazis... we just have to sit on the couch at home."

And yet, even that comparatively small sacrifice has seemed to be too much for some people to manage...!  That's the saddest thing about this whole past year, I think -- how little discomfort we (or at least some of us...) seem to be able (or willing) to tolerate;  how little regard we seem to have for the individual and collective wellbeing of others. I remember reading one comment on Twitter that said something like, "As a society, we've collectively flunked the marshmallow test." No kidding...!

(* Here's an excellent article from The Atlantic this week on "The Last Good Day," and why so many of us are thinking and posting about it right now.)(Hint: it's related to grief.)