"The Empty World" by D.E. Stevenson 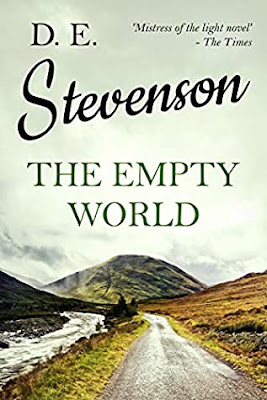 "The Empty World" by D.E. Stevenson (also known as "A World in Spell"), first published in 1936, is a significant departure from Stevenson's usual light romances, and probably one of her lesser-known books.
While there is romance in the story, it's essentially an apocalyptic/dystopian science fiction novel, set 37 years in the future in 1973 (which is actually the year in which Stevenson died). As I read, I was reminded of classic episodes of "The Twilight Zone," and maybe a little of "Lost," which I watched for part of the first season.
British author and lecturer Jane Forrest and her loyal secretary Maisie board the trans-Atlantic airliner The Black Prince in New York for the 12-hour (!) journey back to Croydon/London. In the "dining-saloon," she is enjoying a conversation over dinner with fellow passenger and wealthy newspaper proprietor Sir Richard Barton, when a sudden, violent thunderstorm sends everything tumbling and knocks the plane off course.
With no radio contact or radar to guide them, they manage to land in Renfrew, Scotland -- only to be greeted by an eerie silence. No ground crew rushes out to meet them. The aerodrome/terminal is vacant, as are the homes and shops in the towns and cities they drive through. Roads are littered with empty cars and buses. There are no birds in the air, nor animals in the fields.
The 13 passengers and 9 crew members (two pilots, two engineers, a radio expert, head waiter, assistant waiter, steward and chef)(!) are, it seems, the only survivors of an apocalyptic event -- the last people left on earth.
Or are they?
It's an interesting premise -- and there are some interesting thoughts about technology, power, human behaviour, etc. -- but I found the execution sometimes left something to be desired. While the story is ostensibly set in 1973 and contains some interesting descriptions of how Stevenson imagined life would look in the future, the sensibilities are solidly 1936. There were times when this book -- particularly the dialogue, although also the action descriptions -- read like a 1930s gangster movie script.  The airplane -- with first and second-class sleeping quarters, dining rooms and lounges -- all for just 13 passengers (!) -- resembles an ocean liner or train more than any airplane I remember from 1973 (I couldn't help but think of the 1970s movie "The Hindenburg").  Stevenson imagines huge floating ocean depots where airliners could descend if anything went wrong en route. Several reviewers on Goodreads have noted the chief villain's resemblance to Adolf Hitler, with his interest in eugenics and desire to create a master race from the survivors. The survivors begin pairing off within weeks of meeting each other, which seemed a LITTLE fast to me...!  Cars start easily without any mention of keys or hot-wiring. The book is also somewhat marred by classism and racism -- in particular, a song/rhyme recited by one of the villains -- that is jarring to modern sensibilities.
I debated over the rating for this one, and settled on 3 stars on Goodreads.
My D.E. Stevenson group will be starting a chapter-by-chapter read & discussion of this book shortly. (This should be interesting...!) Once we're done, I'll count this book as a re-read.
This was Book #1 read to date in 2023 (and Book #1 finished in January), bringing me to 2% (!) of my 2022 Goodreads Reading Challenge goal of 45 books. I am (for the moment, anyway...!) 1 book ahead of schedule. :)  You can find reviews of all my books read to date in 2023 tagged as "2023 books."
Posted by loribeth at 7:48 PM