"The Metal Heart" by Caroline Lea 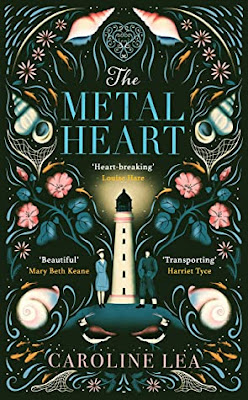 The January/February pick for the Gateway/Lighthouse Women NoMo Book Club is "The Metal Heart" by Caroline Lea.  Set during the Second World War, it's based on the true story of an Italian prisoner-of-war camp on one of the Orkney Islands off the coast of northern Scotland, and the beautiful chapel the inmates built there (which you can still visit today).

Orphaned twin sisters Dot & Con (Dorothy & Constance) flee their home in Kirkwall to the small, fabled island of Selkie Holm, where they live in isolation in a ramshackle hut... until 550 Italian POWs arrive, commissioned to build stone wall barriers around the islands to thwart attacks by German ships and submarines.

A romance develops between Dot and one of the POWs, a sensitive artist named Cesare whom she saves from drowning  -- while Con desperately tries to avoid one of the local men, a guard at the camp, for a very good reason...

I've always liked novels set during the war, but I'm not sure I would have found or chosen to read this one if it weren't for the group. It's a romance, but almost a bit of a thriller, too. There's a dark, tense, foreboding air hanging over everything. Living conditions on the isolated islands are primitive, exacerbated by the deprivations of war.  Ancient legends and dark superstitions lurk in the background. The winters are dark and cold, rations are meager, and the townspeople are on edge with the arrival of the enemy aliens. I found it hard to put the book down as I got closer to the end -- and yet part of me was almost afraid to keep reading, waiting for the other shoe to drop (even if I wasn't quite sure what that shoe would look like...!).

Overall, it was a good read. I'll be thinking about it for quite a while...

Personal note: My father, who was a child during the Second World War, has told me there was a German POW camp near the farm where he grew up in southern Manitoba, just north of the US/Canada border. The only "official" POW camp in Manitoba seems to have been located in Riding Mountain National Park, a few hundred kilometres to the northwest of my grandparents' farm. But I did find this 2011 account on a local news site that corroborates Dad's story. Overall, more than 30,000 German POWs were kept in about 40 camps in Canada -- and the Prairies were a logical location for them -- after all, this was about as far inland in North America (and away from Germany) as you could get!

(As in the U.S., ordinary Japanese-Canadians from the west coast were -- shamefully -- interned and then relocated inland, as far away from the coast as possible. Some of them wound up in Manitoba, where they were put to work on local farms, and some of them wound up staying after the war was over. There's a photo of my dad with his school classmates from the mid/late 1940s, including several Japanese children. One of their fathers became good friends with my grandfather.)

One more digression:  Anyone else ever read "Summer of My German Soldier" by Bette Greene?  I did, when I was a young teen, and I was reminded a little bit of that book while reading this one.