"Anne of the Island" by L.M. Montgomery 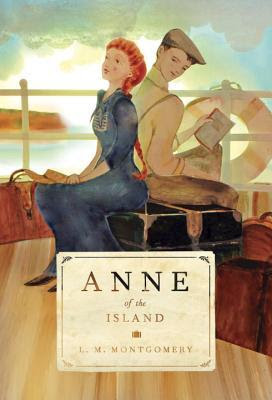 "Anne of the Island" by L.M. Montgomery -- the third book in the "Anne of Green Gables" series, first published in 1915 -- is the current choice of the L.M. Montgomery Readathon group I belong to on Facebook. We started reading and discussing it, chapter by chapter, on Jan. 9th -- it's not too late to join us!  (At the pace of two chapters per week, we'll finish up at the end of May.)

As I usually do, I chose to speed on ahead and finish the book on my own, then go back & follow along with the group (and count it again later as a re-read). This was, of course, after I finished reading Book #2 in the series first --- "Anne of Avonlea," which I reviewed here.

Some editions of this third volume are called "Anne of Redmond," which might be a more accurate title, since the primary arc of the plot covers the four years that Anne spends as a student at Redmond College in Kingsport, Nova Scotia -- standing in for Halifax, where Montgomery lived and attended Dalhousie University for a year (1895-96). (She also lived there from 1901-02 and worked for the newspaper The Daily Echo. If you're curious about the connections between this book and Montgomery's experiences in Halifax, this blog post by Montgomery scholar Sarah Emsley might be of interest.)

Also at Redmond: Gilbert Blythe and Charlie Sloane of Avonlea, and Anne's friends from her days at Queen's in Charlottetown, Priscilla Grant and Stella Maynard. Together with a new friend, Philippa Gordon, the girls rent a cozy cottage together, "Patty's Place." The novelty of women in higher education at the time is a running theme throughout the book -- as well as the distracting allure of romance. Many of Anne's old school friends are pairing off and getting married, including Diana Barry and Jane Andrews.  Anne has many suitors and proposals -- some of them hilarious -- and turns them all down. Then she meets a fellow student who embodies all of her romantic fantasies -- tall, dark, handsome, melancholy (and rich!) Royal Gardner. Has her prince come at last? (But what about Gilbert??)

I can't remember a time when I didn't want to go to university (and I did) -- but, reading "Anne of the Island" again for the first time in many years, I found myself wondering just how much my ambitions (and expectations of student life -- as well as romance) were fuelled by this book?? I was also struck by the Halifax/Kingsport links. This is the first time I've read this book since visiting Halifax myself (once in November 1997, and once in September 2010 -- I thought I'd written about that trip on this blog, and while I have written about certain aspects of it, there is no one main "travelogue" post I can point to -- which is a pity;  it's a wonderful city!) -- and it was so much fun to read her words about the city and, in many cases, almost immediately know what locations she was talking about. For example, I instantly knew that the "Old St. John's Cemetery" Montgomery writes about here, near Anne's boarding house in her freshman year, was a stand-in for the Old Burying Ground, which was almost directly behind the hotel we stayed in. Dh & I took a stroll over there one afternoon to have a look around. Cemeteries do not generally bother me in the least -- but this was probably the oldest one I've ever been in (you have to remember I grew up on the Prairies, where the late 1800s is about as far back as buildings and cemeteries go!) -- and I'll admit, I found it just a WEE bit creepy!  (A few photos below!)

This book is a favourite of many in the Readathon group. I would rank it a notch above "Anne of Avonlea," if not *quite* as high as "Anne of Green Gables" itself.  The Redmond material is wonderful, and some of the Avonlea content between terms is good too, reflecting how time marches on as we grow and age -- Diana's wedding, Ruby Gillis's sad story --  but I could have done with a little less of the escapades of Davy & Dora and the chapters about the courtship of Janet Sweet & John Douglas (albeit that story does provide another romantic relationship for Anne to reflect on).  The ending, however, makes up for all the prior shortcomings.  :)

ALI note:  This passage, toward the very end of the book in Chapter XXXIX ("Deals With Weddings"), really resonated:

Anne was always glad in the happiness of her friends;  but it is sometimes a little lonely to be surrounded everywhere by a happiness that is not your own. And it was just the same when she went back to Avonlea. This time it was Diana who was bathed in the wonderful glory that comes to a woman when her first-born is laid beside her. Anne looked at the white young mother with a certain awe that had never entered into her feelings for Diana before. Could this pale woman with the rapture in her eyes be the little black-curled, rosy-cheeked Diana she had played with in vanished schooldays? It gave her a queer desolate feeling that she herself somehow belonged only in those past years and had no business in the present at all.

And now, as promised, some photos from Kingsport... oops, Halifax.  ;)