"Anne of Avonlea" by L.M.Montgomery 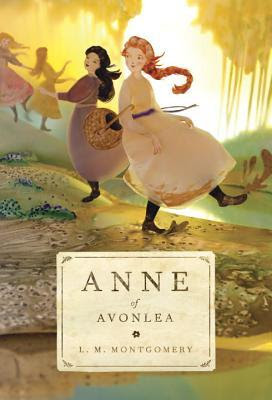 The L.M. Montgomery Readathon group I belong to on Facebook just started reading and discussing "Anne of the Island," the third book in the "Anne of Green Gables" series, first published in 1915. (It's not too late to join us!)

I'm not sure why the group leaders decided to skip over book #2 in the series -- "Anne of Avonlea," first published in 1909 -- but I am a completist who likes to read series books in their proper order, if at all possible. ;)  And it's been many years since I read "Anne of Avonlea" (or "Anne of the Island" either, for that matter) -- so I decided I needed to squeeze in book #2 before tackling book #3. :)

I can see why the powers that be might have decided to skip over this book in favour of "Anne of the Island" (which several group members have declared is their favourite in the series). There's really not a whole lot that happens here that's consequential in moving Anne's overall story forward.  Now 16 going on 17, Anne teaches school in Avonlea and befriends one of her pupils, an imaginative little boy named Paul Irving. She makes other new friends, including her cantankerous new neighbour, Mr. Harrison, and his foul-mouthed parrot, Ginger, as well as the resident of a lovely old stone cottage in the woods with the enchanting name of Miss Lavendar Lewis. She and her friends start a Village Improvement Society, which is the source of much local amusement.  And Marilla adopts TWINS!! -- the orphaned children of a distant cousin -- a pretty, placid little girl named Dora and her brother, a devilish imp named Davy (who is the subject of a great deal of harsh criticism from Goodreads reviewers!!).

By the time the story ends, Anne is (finally) heading off to Redmond College -- and there's a hint that her friendship with Gilbert Blythe may be on the verge of becoming something more...

While this is not the classic the original "Anne of Green Gables" was (of course, what book is, right??), especially in terms of consequential plots and story development, Montgomery's writing still sparkles. There are some very funny episodes, some finely drawn characters, and Montgomery's usual sharp observations of human behaviour.

I don't think this quite merits the 5 stars I gave AOGG -- but it's still a good book on balance, and it functions well as a bridge between books #1 & #3.  It does gain momentum near the end.

On an ALI note:  The character of Miss Lavendar (which appears far later in the book than I remembered), while enchanting, had me wincing with its references to ageism and singleism.  Miss Lavendar is described -- and describes herself -- as "old" (although she is clearly young at heart). She is only 45 years old (!) -- but her hair is described as "snow white" (!). She's also referred to as a spinster, as "lonely" and "odd," and (several times) as an "old maid."

Montgomery is only reflecting the language & attitudes of the times, of course. Overall, it's a sympathetic portrait -- and of course, there is a happy ending for Miss Lavendar before the book ends -- but it was still a bit of a jolt to read from my own perspective as an older, childless woman (married, but aware of the stereotypes that single childless women are still dealing with today).

(Also jolting: her conversation with little Paul Irving about her "little dream boy." He tells her, "I think it's a pity you haven't any boys of your own."  Ouch!)