"All the Single Ladies" by Rebecca Traister 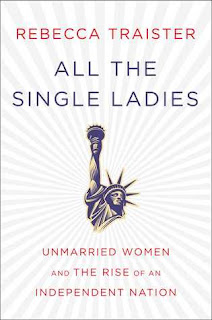 As someone who's been happily married for more than (gulp) 30 years, you might wonder why I was interested in reading "All the Single Ladies: Unmarried Women and the Rise of an Independent Nation" by Rebecca Traister, who writes about women and feminism for Salon, among other publications.

Of course, all married women were single once too -- and will more likely than not be single again at some point in our lives. Married, single, widowed, divorced, cohabiting -- whatever your status, the main reason you should read Traister's book is that it's a fascinating read with messages that are applicable in many ways to all women.

Traister uses historical and statistical research as well as personal anecdotes from a diverse range of women (including herself) to trace the experiences of unmarried women throughout the centuries, and makes the case that they have been a driving force behind many of the political, social and economic changes that have shaped life as we know it today in the 21st century. There are chapters on friendship, work, race, class, geography, money (or the lack thereof), sex, marriage and parenthood (including the role of ARTs and egg freezing).

Of course, single women run the gamut from those hoping to someday be mothers to the adamantly childfree by choice to single mothers. The last full chapter of the book ("Then Comes What?") is devoted to the question of motherhood and the role it plays in single women's lives.  It even carefully explains the distinctions between women who are childfree by choice and those childless by circumstance.

Overall, there was much in this book that I, as a childless married woman, could relate to, particularly in the attitudes of others and the way we are treated by society -- the weird mixture of both pity and snarky enviousness, the accusations of "selfishness," the assumption that all women want to be and will be mothers someday, the constant inquiries as to the status of my uterus...

I enjoyed this book so much that I've picked up Traister's previous book, "Big Girls Don't Cry: The Election That Changed Everything for American Women" (i.e., the 2008 U.S. election) for my next read. I'm enjoying it tremendously as well -- although it's somewhat depressing to realize how little progress has been made over the past 8 years. A review will be forthcoming once I'm finished.