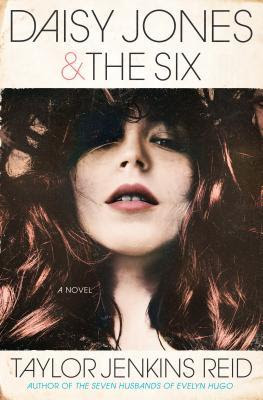 I will admit there was a big part of me that was feeling skeptical as I picked up "Daisy Jones & The Six" by Taylor Jenkins Reid. I'd heard the hype around the book -- there are some RAVE reviews on Goodreads, and a friend said it was the best book she'd read so far this year -- and I wondered whether the book would live up to it.

Also, I was a teenager in the 1970s (when the book takes place). From her photo, the author looked... far too young to remember the Seventies. ;)  (I did some Googling, and found an article from the Los Angeles Times in which Reid says, "Alex and I met in 2008. He was 23. I was 24." = she is now 35 = born in 1984.)  Was this some millennial's rose-coloured glasses/romanticized view of  what the Seventies were like?

(I recognize this is kind of a ridiculous bit of prejudice on my part -- I've read & enjoyed all kinds of historical novels written by people who weren't around for the events they write about. Somehow, though, it seems different when it's YOUR history and YOUR memories that someone is trying to depict...!  I guess it was just another unwelcome reminder that I'm getting older, lol.)

"Daisy Jones and The Six" is a fictional book about a fictional band, in the form of an oral history. Think of it as a transcript of a "Behind the Music" episode. This format might not be everyone's cup of tea, but I enjoyed it. In this respect, it reminded me of "Edie" by Jean Stein & George Plimpton -- a great 1982 book about Edie Sedgwick, a 1960s model & Andy Warhol protege. I was also reminded of "Almost Famous," the movie based on Cameron Crowe's experiences as a teenaged reporter for Rolling Stone (with Billy Crudup as Russell Hammond, the quintessential '70s rock star, Kate Hudson in an Oscar-nominated role as groupie Penny Lane).

While the band may be fictional, there have been a lot of comments from critics, as well as the author, about the resemblance/parallels to the real-life Fleetwood Mac of the "Rumours" era.  (The author has admitted Fleetwood Mac was an influence, as well as the band The Civil Wars, which I am less familiar with.)  You can picture Daisy -- with her skimpy tank tops, bracelets and big hoop earrings -- as a young, feisty red-headed version of Stevie Nicks (and Karen, the keyboard player in the background, as the dark-haired doppleganger for the much underrated Christine McVie). (My very favourite Mac song is "Songbird." Just Christine McVie and her piano and that amazing, crystalline voice. Perfection!)

I was also reminded of a short-lived band from the early 1980s that I liked a lot, Lone Justice, whose lead singer was a charismatic young thing with a powerful, bluesy voice named Maria McKee. (Check out their videos for "Ways to Be Wicked" -- written by Tom Petty -- or "Sweet Sweet Baby.")

In many ways the book was what I expected, almost to the point of cliche. There is sex (in closets, even). There are drugs. (Way too many drugs, and alcohol. And trips to rehab.)  There is rock & roll. And all the drama that goes along with those things.  The story traces the rise (& fall) of The Six,  and what happens when they're joined by Hollywood wild child/budding singer/songwriter Daisy Jones. (Sample quote: “I had absolutely no interest in being somebody else's muse. I am not a muse.
I am the somebody. End of f***ing story.”)  There is chemistry, there are clashes of oversized egos and massive blowups. (Spoiler alert:  There are pregnancies, there is a female character who is childfree by choice (and a saintly madonna figure, for contrast), and there is an abortion.)

But in other ways, it was not what I expected at all -- both for better, and for worse. I don't want to give too much away here... but I found the ending just a bit flat. In some ways, though, it was probably pretty true to life. For every Fleetwood Mac (still going strong after 50+ years, albeit with only two of the original members), there's a Lone Justice -- a band that records a handful of brilliant albums, & then combusts and fades away. Not all bands last as long as Fleetwood Mac;  not everyone's dream is to still be a rock star when they're 65 or 70. Some people are happy to take the money and run. I'm sure it was fun while it lasted...!

This was a Reese's Book Club pick, and I understand that Reese Witherspoon & Amazon are adapting it into a limited run TV series. It will be interesting to find out who's going to put the songs to music (lyrics to the songs from the band's most famous album, "Aurora," are included at the back of the book), and how they wind up sounding. Not to mention the casting...!  Any advice to offer the casting director??

I gave this four stars on Goodreads. I'm not sure it deserved quite that many -- maybe more like 3.75 -- but I did enjoy it overall, and I was feeling generous, lol.  ;) If you love Seventies music and "Valley of the Dolls"-type novels, and old episodes of "Behind the Music," you will probably get a kick out of "Daisy Jones and the Six."