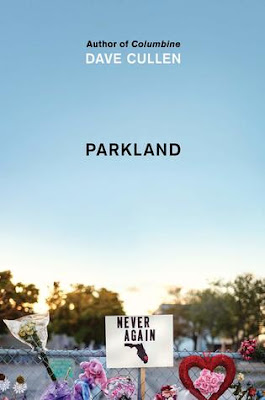 Ten years ago (!) this summer, I read "Columbine" by Dave Cullen, the definitive account of the school shooting at Columbine High School in Littleton, Colorado (which happened 10 years before that, in April 1999).  Whether or not true crime stories are your kind of reading, it's an amazing book (with some perceptive insights on grief, loss & the long-lasting effects of trauma), and I have recommended it highly to many people in the years since then.

(Sadly, I have a cousin who still can't bring herself to read it -- she was an elementary school teacher in a small town in the U.S. that was affected by a shooting at the local high school in 2005. It wasn't her school, but nevertheless she & her students were on lockdown, and she knew everyone involved.  The subject matter is still way too close to home for her.)

After reading "Columbine," I reviewed it on my blog, here -- and was floored when Dave Cullen himself popped by to comment (and then commented again on a follow-up post I wrote). (As I noted at the time, stuff like this never or rarely happened, pre-Internet...!)

I've been following Dave on social media ever since then. Unfortunately, his accumulated subject matter expertise has made him the media's go-to guy whenever there's a major mass shooting event in the States (which, sadly, is far, FAR too often). He developed post-traumatic stress disorder (PTSD) himself, post-Columbine, and as he found himself commenting on mass shooting after mass shooting in Columbine's wake, he despaired that nothing was ever going to change.

And then came Parkland.

Dave immediately noticed something different in the aftermath of the shooting at Marjory Stoneman Douglas high school in Parkland, Florida, on Valentine's Day 2018.  The day after Columbine, the survivors were like zombies, shellshocked. These kids in Florida were MAD.  And they were demanding action.

Before long, they were taking action themselves: within days, they were (successfully) lobbying the Florida state legislature to demand changes to gun control laws;  within weeks, they had organized a march on Washington (the March for Our Lives) that attracted 470,000 people, and up to 2.1 million in almost 800 "sibling" marches on all 7 continents.  Meanwhile, they also began networking with other kids from across the country, and spent the summer on a cross-country bus tour, building a movement. Their efforts to register young voters and elect candidates who share their quest for sensible gun control laws had a tangible impact on the 2018 mid-term elections.

While both "Columbine" and "Parkland" are about school shootings and what happened afterwards, and both books have a similar cover design, there are some important differences. "Columbine" was 10 years in the making, and delves heavily into the story of the two killers, what motivated them, how they planned and carried out the shooting, and how investigators gradually unravelled what really happened (versus the myths that sprang up almost immediately), as well as the stories of the victims and the survivors.

"Parkland" arrived in bookstores almost one year to the day after the MSD shootings. The events of February 14, 2018, are dispensed with in just a few pages;  the killer is not named and is barely mentioned.  The focus of the story is on what happened next:  a fly-on-the-wall view of a year in the life of a group of motivated, media-savvy teenaged survivors, and how they came together to build a movement for change.

It's a story of hope.

I really enjoyed "Parkland" and found it hard to put down (and I can say & mean "enjoyed" in a way that I couldn't about "Columbine," if you know what I mean... although there are some parts where you may want to have some kleenex handy...!). The "Notes on Sources" at the end are among the most readable I've ever seen, and add further insight and information.

I gave this book four stars on Goodreads.

The story of the Parkland kids and the March for Our Lives continues. I would love to get Dave's perspective on them (and the further great things I am sure they will accomplish) in another 10 years... but I don't think anyone would blame the guy if he wanted to move on to other subjects. ;)  He's been following the story of two gay soldiers for the past 20 years, and interrupted his work on a book about them to follow the Parkland story. He's hoping to finally complete that other book later this year.  I am looking forward to reading it, too!