"Before & After" by Alison Wilson 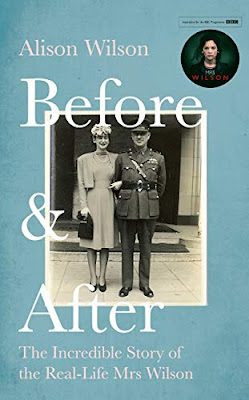 Over the past few Sunday nights, dh & I found ourselves captivated by "Mrs. Wilson," a three-part British drama on PBS. This was actually a repeat showing -- it was originally shown on PBS a few years ago, but we didn't see it then. I'm glad we had the chance to do it now. (Even dh, after some initial eyerolling, was hooked after about 10 minutes!)

"Mrs. Wilson" is based on a true story. Actress Ruth Wilson plays the title role of her own grandmother, Alison, whose grief over the death of her husband, Alec, in 1963 becomes complicated when another woman claiming to be his wife shows up on her doorstep (!).  And that's only the beginning of the web of lies and deception that she begins to unravel in trying to learn the truth about who her husband really was. The two met in London during the Second World War, when Alison was his secretary at the Foreign Office. Was he (still) an intelligence officer/MI6 agent of the British government? Was he a liar and con man? Or perhaps a bit of both?  (The Wilson family is still trying to learn the truth: the British government refuses to release its files pertaining to Alec Wilson.)

Incredibly, Alison kept what she knew (and what she suspected) about her husband from her two sons until she handed them the manuscript of a memoir, years after his death. The TV series was based on this memoir, published in 2019 as "Before & After: The Incredible Story of the Real-life Mrs. Wilson." After watching the TV version, I found the book for a very reasonable price and bought it for my e-reader. (I also found a 662-page (!) biography of Alexander Wilson by Tim Crook on Amazon, but decided to pass on that one.)  The book includes a foreword by Alison's younger son, Nigel (the father of actress Ruth), and an afterword by Ruth herself, outlining what more the family has learned about her grandfather since Alison's death, how her story was brought to the screen, and where fiction departed from fact. It's not very long, and I read the entire thing in less than 24 hours.

You might expect "Before & After" to refer to Alison's life before and after Alec Wilson's death -- and it does -- but it is also about her life before and after her conversion to the Roman Catholic church -- a testimony of her spiritual awakening and her personal relationship with God. In 1967, she joined a secular religious community and took vows there;  later, she became the first laywoman in England to study Catholic theology at a Jesuit college that had only recently opened to women students. After five years of study, she embarked on a new career, teaching Christian mysticism.

I generally prefer to read the book before seeing the film version. In this case, I'm actually rather glad that I saw the TV show first. It's a complex story, with many pieces still unclear or missing, and some of the details have obviously been embellished or smoothed over for the sake of better storytelling (some of the details revealed in the TV series actually did not come to light until after Alison Wilson's death) -- but overall, it was riveting viewing.

The book, while somewhat interesting and providing details not covered in the TV drama (while clarifying others), is less riveting. Alison's spiritual/faith journey, while touching and sincerely and earnestly told was, frankly, not quite as interesting to me, and I will admit that I found myself skimming over long passages of the "After" section.