"Still Glides the Stream" by D.E.Stevenson 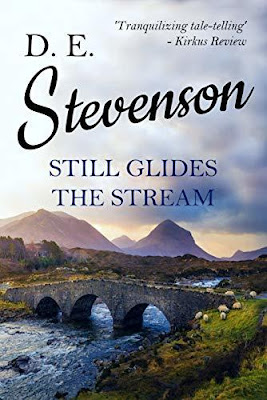 "Still Glides the Stream" by D.E. Stevenson (first published in 1959) is sometimes referred to as a "sequel" to "Amberwell" and "Summerhills," both about the Ayrton family -- and the link to those two books is partly why my DES online discussion group chose this as our next selection. Amberwell and a couple of members of the Ayrton family do make a cameo appearance in this book (characters and settings from one DES book often pop up in another), and it takes place in the same general area, but it's really a completely separate volume/story unto itself.

"Still Glides the Stream" covers familiar territory for a DES novel, both geographically and thematically. After 12 years of military service, during WWII and afterwards, Will Hastie returns to his father's estate in Scotland to take up farming. His best friend from boyhood, Rae, died during the war, and Rae's younger sister Patty is engaged to her cousin Hugo, who is also (conveniently) the new heir to her father's estate since Rae's death.  Before he died, Rae sent Patty a final letter, hinting at a big secret he hopes to share with the family on his next leave home. When Patty shares the letter with Will, he decides to head to France for a holiday to investigate. What he learns there will change everyone's lives...

Like Stevenson's other books, this is a warm, gentle little story of a bygone era -- sometimes almost too much so, perhaps? One Goodreads reviewer points out the novel's "Anglo-chauvinism."  For example, the people Will meets in France are almost uniformly disagreeable, to the point of caricature.  And Julie's sacrifice might seem somewhat horrifying to modern readers, but there was likely no doubt in the minds of readers of the day that it was the proper thing for her to do.

Still, despite its flaws, it's a sweet, rather wistful story of post-war grief and loss, with the well-drawn characters and lovely descriptions that were Stevenson's hallmark.

I've volunteered to organize our group's discussion of this book (after we've finished reading and discussing "Summerhills" together, later this summer)... I suppose I didn't have to read it first to get volunteers and a discussion schedule organized, but I usually read do the book through once myself in advance of our chapter-by-chapter discussions. I'm glad I did it now, and I'll count it again as a re-read once we're finished our discussions, later this summer.