Crazy or grieving? (Mary Todd Lincoln was "one of us")

Mary Todd Lincoln, wife of U.S. President Abraham Lincoln, tends to get a bad rap. People have called her "crazy" and point out that she spent some time in an insane asylum after her husband's death.

A new exhibit at President Lincoln's Cottage -- a Washington, D.C., museum I had never heard of! -- makes the case that Mary was not crazy -- she was a bereaved mother. Moreover, the exhibit places the Lincolns' grief "alongside the stories of modern-day bereaved parents and their kids, showing their similarities across time."
Think about it! "In her lifetime, the former first lady lost her husband to an assassin’s bullet and three of her four children to disease. Her lengthy, public mourning defied conventions of the day and led to criticism and questions about her sanity," says a fascinating Washington Post article about the exhibit.
The cottage was a kind of summer White House -- a refuge where the Lincolns could escape the heat and humidity, relax and grieve the loss of their son Willie (who died in February 1862 of typhoid fever, age 11) in peace.
"The trauma of child loss shaped both Lincolns." says the museum's website about the new exhibit. "It seeded new fears they carried until they died. It deepened the limits of their emotional and mental endurance. It changed the character and course of their lives. And, the stigma of grief transcends time and place as families continue to struggle under the societal pressures of mourning the death of children in modern society."
Does any of this sound familiar? (From the Washington Post article:)

The modern bereaved parents in the exhibit, who are anonymous, describe a society that is in some ways even more uncomfortable with expressions of grief than it was 150 years ago.
“I think society expected me to just move on,” says the mother of Jacob, who was murdered when he was 6. “I think it is still a surprise for some people that we still talk about her so freely,” said the mother of Abby, an only child who died at age 17 five years ago. “I think they are confused as to why we are still talking about her, assuming reflecting on her life, and death, only accentuates the pain.”
[Callie Hawkins, a bereaved mother who works at the museum and helped to create the exhibit] encountered this discomfort when she presented the project to some colleagues. “Isn’t it going to make visitors sad?” they worried.
Yes, it will,  Hawkins replied. And that’s a meaningful experience.

Read the article!  And, if you're in Washington D.C. over the next year or two (and hopefully COVID-19 will subside enough by then to make such visits possible!), you can visit the exhibit at the cottage museum too. :)
*** *** ***
Early in my blogging career (January 2008), I saw another article about another museum exhibit that got me thinking about the fine line between public perceptions of bereavement and insanity. Read about Ethel Smalls' suitcase here.
I wrote then:

There but for the grace of God and about 70 years difference in attitudes toward mental health go I.
I know that just about all of us, from time to time, feel misunderstood by the people around us, and yes, there are days when I feel like I'm going out of my mind. I've even consulted a therapist from time to time. But so far, nobody's tried to commit me to an insane asylum. At least, not yet...

While writing this post, I was reminded that today is International Bereaved Mothers Day. I don't have a lot to write on the subject, but wanted to acknowledge that "regular" Mother's Day can be difficult for those of us who never got to bring a baby home (to the point that I refer to that "other" day as "Voldemort Day" on this blog -- That Day Which Will Not Be Named, lol). Be kind to yourselves today, this week and next Sunday! 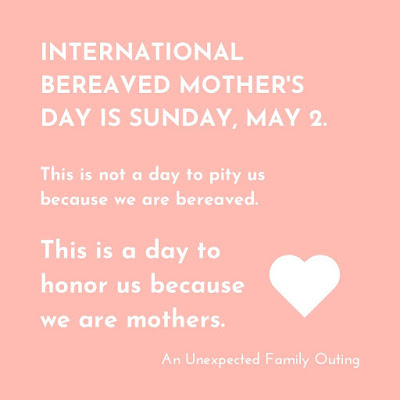